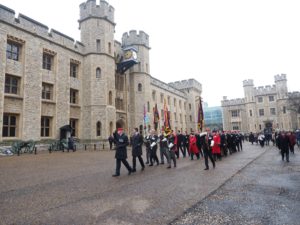 1.​Both the Office of Provost Marshal and the Royal Military Police (RMP) have had a long and close association with Her Majesty’s Royal Palace and Fortress the Tower of London (“The Tower”).

2.​The sometimes gruesome work at the Tower of Provost Marshals of yesteryear is well known, but less well documented is that elements of the Corps of Military Police (CMP) was based within its confines during both World Wars; that the Headquarters of the Special Investigation Branch (SIB) was located there too for some time both during and after the Second World War; and that the CMP assumed security duties within the Tower when the Yeoman Warders were absent on duty, a traditionmaintained today when members of 253 Provost Company, 4 Regiment RMP deputize for the Yeoman Warders when they are attending the ceremony conducted when a new Constable of the Tower is installed.  In the past, the Yeoman Warders also received their Warrant Cards personally from the Provost Marshal (Army).

3.​Because of these enduring links with the Tower, the RMP are offered the rare privilege of holding an annual Church Parade, attending Matins in the Chapel Royal of St Peter Ad Vincula (“St. Peter in chains”) by kind permission of both the Resident Governor and the Canon.

4.​This is a national event, which this year, is being coordinated by the National Chairman and the Officer Commanding 253 Pro Coy, who will also act as Parade Commander, assisted by a serving Warrant Officer.

5.​Association members, both serving and retired, wishing to attend are to report to the Yeoman Warders’ Club (just inside the Eastern Drawbridge) by no later than 1015 hours on Sunday 10th February 2019.  Attendees are advised to bring with them some form of photographic identification.

7.​Branch Standards are invited to parade.

8.​The parade is to form up outside the Yeoman Warders’ Club at 1030 hours and then march the short distance to the Chapel, paying appropriate respects (“Eyes-right!”) to HM Guard at the Jewel House enroute.

9.​Choral Matins will be conducted by Canon TheReverend Roger Hall MBE and Association Standards (normally the National Standard and the London Branch Standard if available) are to be laid on the altar during the first hymn.

10.​The first lesson will be read by the Provost Marshal (Army).

11.​After Matins, the parade will form-up outside the Chapel and march back to the Yeoman Warders’ Club.  The salute (“Eyes-left!”) will be taken by our Deputy–Colonel Commandant Major-General B J Bathurst CBE, supported by the Provost Marshal.

12.​Regrettably, owing to factors beyond the Association’s control, there will be no luncheon provided in the Yeoman Warders’ Club this year although cold drinks and warm beverages will be available.  There is, however, a restaurant within the grounds and just outside the Thames River side of the Tower.

13.​There is no parking available within the Tower however on-street parking is available nearby on Tower Hill.

14.​The nearest Tube Station is Tower Hill on the District/Circle Line.

15.​The nearest hotel is the Guoman Tower Hotel in St. Katharine’s Dock.  There is also a Travel Lodge 100 yards from the Tower Hill Tube Station.

16.​This is very much a family event and the Tower is open to visitors after the service.